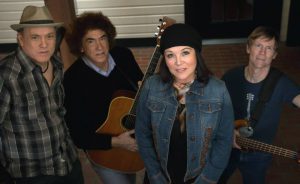 The Traceys are a contemporary acoustic band that prides itself on its originality and soulful delivery. Their repertoire includes a wide variety of musical styles, and features the fine three and four part harmony singing that has become their hallmark. While it’s hard to put a finger on the band’s musical style, their influences include Americana, Folk, Bluegrass, and Country Blues traditions. Their song selection includes both original and traditional compositions.

The core founders of the group, brothers Larry and Michael Tracey, began performing together in the Eugene area in 1989. Larry was a well established acoustic guitar player and singer songwriter on the Eugene music scene, and Michael was a budding harmonica player and blues singer. Since the two joined forces to form The Traceys, the band has performed extensively at festivals and venues up and down the west coast. The present band lineup is rounded out by veteran bass player and vocalist Steven Myers, Sylvain DuPlant on Mandolin and Guitar, and Root Tracey on vocals and percussion.

Michael first met Root in 2010, and the two were wed in 2011. When Larry and Michael started talking about getting the band back together in 2013, both agreed they needed a female vocalist. Michael had been hearing his wife singing around the house from time to time, and believed he could hear something special in her voice that was exactly what The Traceys needed. It has turned out to be a perfect fit, and Root Tracey has been wowing audiences with her passionate soul singing and spot on percussion ever since. In addition, Root is a powerful songwriter and has written several songs in the band’s repertoire.

As well as outstanding vocal harmonies, The Traceys also feature the stellar harmonica playing and soulful singing of Michael Tracey. Michael was crowned 2007 Northwest Harmonica Champion and performed at the Willamette Valley Music Festival at the Cuthbert Amphitheater as one of the winners of the New Singer/Songwriter Competition. Michael was also crowned Best Male Blues Vocalist three years running, from 2008 through 2010, at the blues awards ceremony held by The Rainy Day Blues Society in Eugene.

The songs that The Traceys select to perform have special meaning to them. They believe that the songs that resonate with them will also touch the hearts of their audience, and that is what they aim to do. Their soulful, sometimes deeply personal, music is known to take audiences on a musical journey. At a Traceys concert you may laugh, sing along and, perhaps, even shed a tear or two. This unique band’s powerful music is not to be missed.